“Have my Miranda rights been violated?” 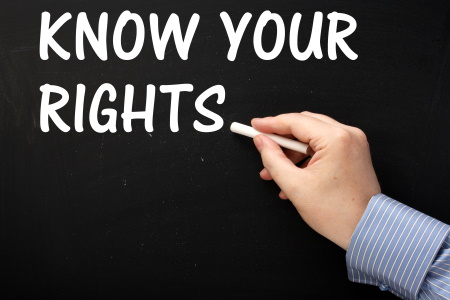 I’m sometimes asked this question in regard to issues that are related to their arrests. I have found that often my clients misunderstand what their Miranda rights are as well as when Miranda is applicable.

I’ll do my best to explain what “Miranda Rights” actually are, when these rights apply, and who those rights came to be.

In the famous 1966 Miranda v. Arizona case, the US Supreme Court determined that law enforcement was required to provide a suspect with constitutional warnings when under interrogation or in police custody.

These warnings were required to be given prior to questioning. Otherwise, the police would not be allowed to use an admission of guilt in court.

Rights Secured by the US Constitution

Ernesto Miranda was a man who was accused of kidnapping an 18-year-old woman and raping her. He was brought in to be questioned and confessed to committing the crime.

During the trial, Miranda’s attorney tried to have his confession thrown out. The lawyer’s motion was denied. The U.S. Supreme Court held that since Miranda made his statements to police without being advised of his rights, his confession needed to be thrown out.

What Is Considered Custody?

An individual is considered to be custody for the purposes of the Miranda warnings to be applicable when the police restrain a suspect in a way that appears to be a complete custody situation.

An individual who is inside a jail cell, detained inside a police cruiser, or is in handcuffs is usually considered to be in custody. A person questioned in a traffic stop or out on the street by the police is not usually seen as being in custody.

An individual is considered to be interrogated when a suspect is questioned by the police about a crime.

The Functional Equivalent Of Interrogation

Also, there is a doctrine referred to as the functional equivalent of an interrogation which is counted as an interrogation. The police can provoke a suspect to give a response even without directly asking questions.

For example, if a suspect is in the back of a police car being transported and is listening to the two police officers sitting in the front seat speaking to one another about how the victim of the crime suffered painfully. This type of interrogation can prompt a confession from a suspect of a crime.

The police conversation, if designed to obtain a response from a suspect, can result in a court finding that the police were functionally interrogating a suspect while in custody.

The Individual Must Voluntarily Relinquish Their Rights

In order for a suspect to waive their Miranda rights, the individual must voluntarily, freely, and knowingly consent to give up their constitutional rights. The courts use certain factors to assess whether or not a suspect gave up their rights before they answer questions from the police include the individual’s sobriety, intelligence, age, and whether the police overcame the person’s will, and others.

Judges examine the specifics of every case and then make a factual determination on whether or not an individual has the capacity for waiving their Miranda rights.

When Miranda rights are given to a suspect by law enforcement, the ordinary rule is there cannot be any police questioning after a suspect asserts those rights. When a suspect asks for a lawyer, it is unlawful for police officers to question a suspect.

The US Supreme Court recently clarified that when a suspect initially waives Miranda rights they are required to explicitly assert these rights during the middle of the interrogation if a suspect wants the questions to stop.

Your Right To Remain Silent

In summary, the constitution allows an individual to remain silent when faced with being questioned by the police. Miranda rights are explicit warnings given to a suspect that they have the right to remain silent, a right to have a lawyer if they are indigent, and the right to consult with an attorney. The Miranda rights need only to be explained to the suspect whenever the individual is being questioned by the police and is in custody.

Any time you and a police officer have an encounter, you should always be cooperative and police, but NEVER say anything that incriminates yourself.

If the police arrest you, do not make a statement. Invoke your right to remain silent and your right for legal counsel. Speak with a lawyer as soon as you can to discuss the options that are available to you.