By law, if someone has a court date, they are legally mandated to appear for their court hearing. Anyone who is involved in any type of criminal proceeding must show up for all of their court appearances.

If you don’t show for your court appearance, then you have committed a failure to appear. 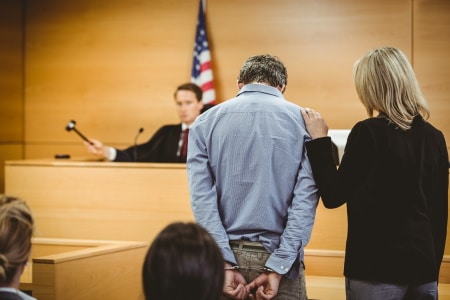 Per the 2016 Colorado Revised Statutes Universal Citation; CO REV Stat 16-2-110, it is a Failure To Appear.

Should a person who has been summoned or had a complaint served upon them pursuant to part 1 fail to appear in person or via counsel at the time specified, the courts may legally issue a bench warrant for the person’s arrest.

Failure To Appear Is A Missed Court Date

Furthermore, the DMV in Colorado may also suspend your driver’s license as long as the warrant is still outstanding. Persons will also face serious criminal charges added to the criminal charges that they were charged with prior to their missed court date.

Should a bench warrant be issued, you might be arrested at any moment. Law enforcement will seek you out whether you’re at work, home, or elsewhere. Furthermore, you’ll likely be incarcerated until the hearing or unless you can post bail. You’ll also have to pay administrative fees such as court costs, fines, and more. You may not be allowed to post bail if you failed to appear and may have to remain behind bars until such a time as the courts can again hear your case.

If I Have A Criminal Attorney, Is It Mandatory That I Appear?

In Colorado, defendants without an attorney will have to appear for each and every court appearance. It’s important that the person not rely upon the public defender to appear in court on their behalf. However, if the defendant has a criminal defense attorney, they may be able to skip out on any minor court dates as long as their attorney shows up in court on their behalf.

If you’re not sure if you’re required to be in court at any given time, you should call the court clear prior to the court date and find out if you need to appear in court that particular day. If someone knows that he or she can’t make their next appearance in court, it’s important to call the court clerk as soon as you can. The clerk might be able to reschedule the court hearing for you.

How Can I Have A Bench Warrant For Failure To Appear Removed?

Should a bench warrant be issued for failure to appear, you’re likely to be arrested at any moment. Law enforcement has the right to seek you out whether you’re at work, home, or elsewhere. You’ll likely have to go to jail and stay there until such a time as the court case hearing can be rescheduled. You’ll also be responsible for paying any court fees, fines, and administrative fees for your actions.

Should you have a bench warrant in Colorado, contact an experienced criminal defense attorney quickly. An attorney can file a motion called “Motion To Quash” the bench warrant. The courts will then reschedule the court hearing.

Probation And Failure To Appear

If on probation and you receive a “failure to appear”, you might be considered to be in violation of the probation requirements. The end result may be that you lose probation, receive additional fees and fines, and you may be required to do some community services. You might also receive some more strict terms of your probation.

Bail And Failure To Appear

If you fail to appear and you’re out on bond you may have your bond revoked and receive more strict probation including additional fees and fines as well as be required to do some community service.