5 Reasons You Need A DUI Lawyer

A DUI (Driving Under the Influence) is, unfortunately, a crime that is totally preventable.

What is even more unfortunate is some people mistakenly think that going to DUI court alone to “face the music” is actually the best thing to do. Doing just that can result in confusion, punishments that you don’t deserve, and excessive fines.

These are the top five reasons why you should get an experienced criminal defense attorney in Colorado Springs to lead the way through a DUI prosecution, which can be a real obstacle course if you’re not a savvy DUI lawyer.

1. There can be huge fines and expenses that come with a DUI conviction.

A DUI Attorney might help to reduce the amount of the fines that you have to pay ultimately.

A first time DUI conviction in Colorado Springs, Colorado can cost you up to $13,530, according to the Colorado Department of Transportation. With enhancements, it can go up quickly an additional $3,000. And that doesn’t even include insurance premium increases, DUI school, ignition interlock devices, or other fines and court costs.

Getting a good criminal defense attorney in long run might more than offset the expense that your lawyer is able to save you financially.

2. A DUI conviction may result in jail time.

A DUI Lawyer might be able to help minimize the amount of time in prison or jail that comes with a DUI conviction.

In Colorado, a first time DUI might result in a maximum of 180 day jail sentence. A subsequent or second DUI can result in 365 days in jail. A DUI charged and convicted for a felon can result in a 5 year prison term.

It is critical to have a criminal lawyer working on your behalf to minimize the amount of jail time if the State Attorney is seeking it.

3. A DUI conviction may result in you losing your driver’s license.

Working with a DUI Attorney might you you avoid losing your driver’s license.

Let’s face  it, the right to drive is the most important thing for the most of us. If you have a driver’s license, then simple things such as being able to pick up your children from daycare, go to the store, or go to work becomes nearly impossible.

A DUI conviction can result in losing your license from 6 months up to the rest of your life in some dire circumstances. Fortunately, a DUI attorney might be help you avoid losing your license, making it possible to stay out on the road.

4. A DUI Attorney will be able to help you navigating a DUI conviction’s requirements, and help you better understand the process.

Issues with court dates, SS-22 forms, insurance premiums, your driver’s license and more. All might be involved when facing a DUI conviction. Being convicted of a DUI can lead your head spinning with all of the requirements. All of the legal requirements that surround a DUI arrest can be just as confusing. Why was I stopped by the Officer? Did he have the legal basis for arresting me? How does a Breathalyzer actually work?

A qualified criminal defense attorney can answer those questions and any other you might have.

Only about half of a lawyer’s job takes place inside of the courtroom. A significant portion of time involves helping clients so that they understand what is happening. That is why attorneys are referred to as “counselors.”

5. Finally, a DUI Lawyer might be able to help you with entirely avoiding the dreaded DUI conviction.

A Drunken Driving (DUI) conviction isn’t inevitable simply because you were arrested for DUI. An attorney, in many cases, might be able to assist you with avoiding a conviction entirely. That can be done through getting your charges reduced down to a reckless driving, getting the charge dismissed, or completely win the case at the trial level.

To have even the slightest of chances of mitigation a DUI conviction, you need an experienced DUI attorney who knows what to do and is not afraid to go to trial if necessary.

Take a look at the estimated costs for a DUI conviction from the Colorado Department of Transportation. While many of the costs are estimated (attorney fees will vary greatly due to many factors including complexity, additional complications, etc.) , you should know that a DUI is an expensive proposition.

Call Jeremy Loew today and get an aggressive and experienced DUI lawyer on your side now! 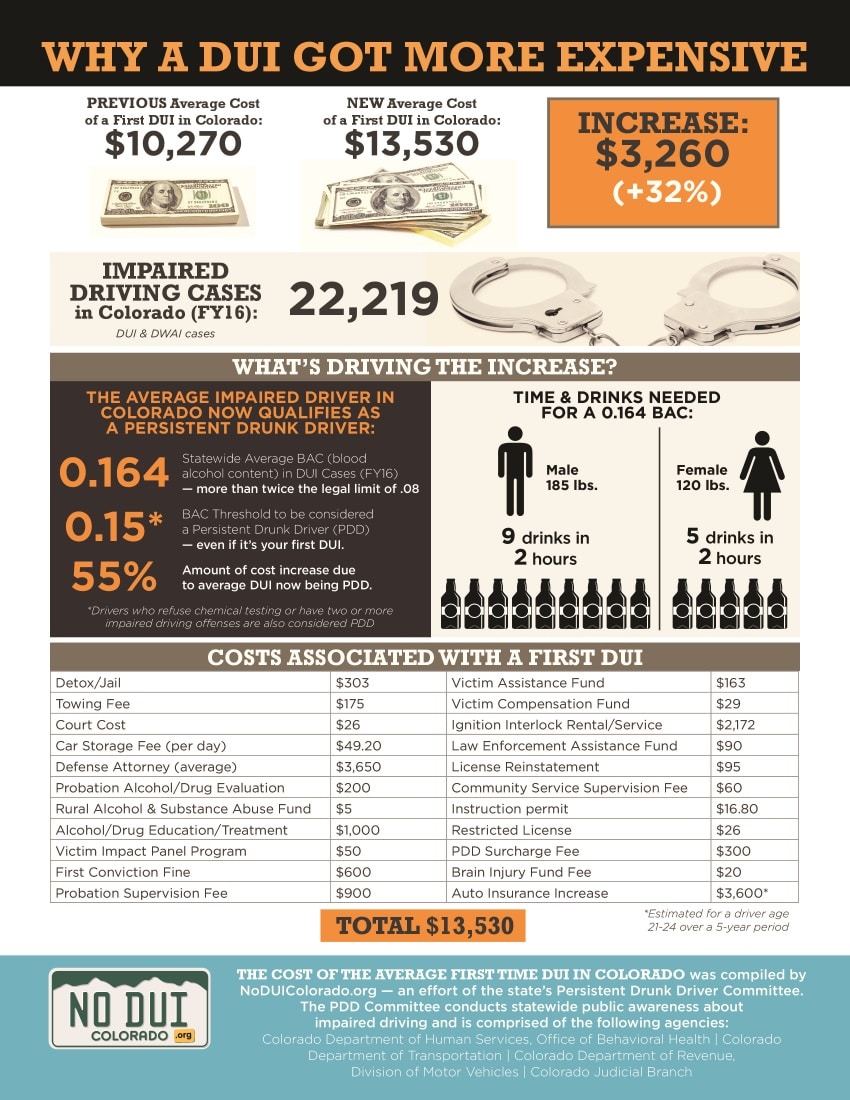 Reprinted with permission of CDOT – Colorado Department Of Transportation.